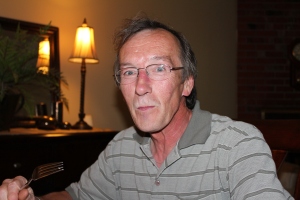 Well it is day three here in Japan and we have to say that we are doing really well for ourselves. It seemed like a toss-up whether or not we would actually even make it out the door to the airport as in classic Jessica style someone wasn’t packed yet at 3am following a night-cap with some gfs…. I know the suspense has been killing you readers and we (mostly Jessica) are so excited to report that Jim DID shave off his mustache.  Much to Barbs dismay, who mentioned that “Jim has no top lip” and the mustache was no longer there to  hide that fact.

The flight to Tokyo was in total about 15 hours of air time, most of which we slept and we arrived here at approximately one in the afternoon.  We managed to purchase a subway ticket to Yokohama (with a little local help) and took a two-hour train to our destination.  Once we got off the train we proceeded to wander in circles lost until someone (in true Jessica style) batted her eyelashes at a man who walked us the entire way to the hostel.  The hostel is lovely by the way, and was all handmade by a Japanese & Canadian carpenter.  The entire thing is natural honey colored wood and has ship helms mounted on the ceiling.  We feel that we have almost mastered the train stations and have had many successes full wanders around, seeing the Landmark hotel, a carnival, and Japans own China town. 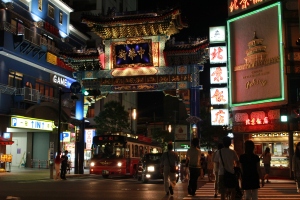 It has been a bit more difficult than we had originally thought to get around as not many people speak English, and most signs are in Kanji symbols   There are also many customs that the Japanese people abide by and we have seen that it is very offensive to some to break them, for example we were holding hands side by side on an escalator and an older Japanese man wanted to walk down instead of standing. He proceeded to yell at us in Japanese (we can only assume he was telling us to move over) so when he got by us we started to laugh. That obviously offended him because he chased us all over the shopping mall (literally) screaming at us in Japanese. We escaped him by walking quickly and not looking back. 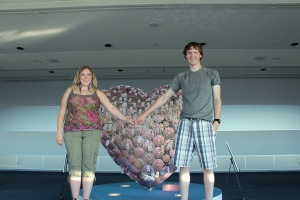 Heart of love at the top of Landmark tower

The landmark hotel was very cool to go to, it had the worlds second fastest elevator and on a clear day you can see all the way to Tokyo and Mount Fuji. The day happened to be clear for us and the view was great. Lastly our struggles here have been with food. The meals here have been different from home, even sushi is nothing like Canadian sushi. Venturing out for dinner we purchased a rice bowl with pork and a Japanese man proceeded to crack a raw egg onto it which was to eat, as is. Not exactly our favorite food. China town had delicious noodles and Peking duck (we opted for roast pork because the duck was sold out) and was probably our favorite meal here. There is also healthy inexpensive meals at local stores similar to 7/11 in Canada where you can purchase fresh noodle bowls and take them home to cook. We have decided that this will be our go to food from now on. Today we are going to venture out of the city to Hakone and hope to visit the natural hot springs or Onsens (in Japanese) and will be meeting Jessica’s friend Lisa tomorrow for dinner in Tokyo, we are also hoping to catch a Sumo wrestle tomorrow. 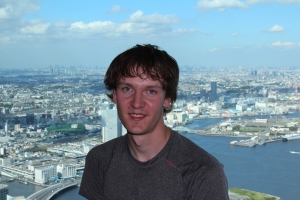 The view from Landmark tower

It’s another busy day ahead of us full of annoying old people so thanks for reading!

P.S.  There is a comment section below, feel free to leave your interesting comments or questions.